All meetings start at 7.30 pm in the Farmor Room except for the February meeting which is at 10am

No meetings in July and August

October 21: Frank Hornby: the story of Hornby and Meccano by David Nathan 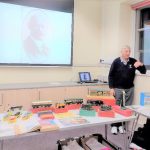 David Nathan gave an interesting and informative talk on the toy manufacturer Frank Hornby (1863-1936), the inventor of Meccano and Hornby Trains and subsequently Dinky Toys.
Frank was a bookkeeper but his passion was to create educative toys for boys. He started making a construction toy for his sons out of metal and soon realised if the parts were made interchangeable then the building of complex mechanisms was fairly simple. His first toys were marketed as Mechanics Made easy but the name was change to Meccano in 1908.
What came across in the talk was that he was a brilliant entrepreneur, starting off small in the early 1900s and gradually building the business until he had large factories and sold his products all over the world. He was able to see the change in markets adapting to different social circumstances of the early decades of the twentieth century. He worked out that it was more profitable to have only one retailer per a certain proportion of the population and to these retailers he ‘sold’ good-looking display cases to show the products off to the best effect, which was very appealing to small boys and their parents. It is interesting that Meccano has still kept to Imperial measurements of the early pieces but today is being made in France and owned by a Canadian company.
Around 1920 the Hornby clockwork ‘O’ Gauge enamelled trains and accessories were introduced which later developed into electric train sets. These train sets were very popular but required a lot of space, post-war houses were not so large and in 1938 the table-top Horny Dublo ‘OO’ model railway system was introduced.
In the early 1930s Dinky Toys die cast miniature model cars were produced. There were difficulties with the type of metal being used and during the Second World War metal toys were not made due metal being required for armaments so Dinky Toys did not really take off until after until after the war.
Frank died in 1936 and his son Roland took over the business, however he was not such a progressive thinker as he is father and was slow to convert to plastic materials. The firm went from a healthy profit to a serious debt and was sold in 1964 to Tri-ang.
David Nathan brought along a number of items for members to look out, including books and the very interesting Meccano magazines. It was certainly a talk that brought back memories of childhood for many of the audience.

James Harris from the Corinium Museum opened the season with a very interesting talk of the archaeological finds in the area. There is a wide range of finds in the local area from Early Mesolithic, Early Prehistoric, Neolithic (the only Neolithic burial in the Cotswolds was found at the Home Farm site) through to Bronze Age, Iron Age, Roman and Anglo- Saxon. At Horcott Quarry there was evidence of an Iron Age Settlement, a Roman homestead, with a c AD 250–350 cemetery nearby and also an Anglo-Saxon settlement with a hall and sunken feature buildings. This corresponded with the Anglo-Saxon Graves found mid-19th century near the Quenington Road. Post-meeting James queried the site of the Fairford Anglo-Saxon graves marked on the OS map as an SSSI. The more likely site is west of the Quenington road in a field called Waterslade and under West End Gardens. In 2007/8 members of FHS were able to visit the Horcott Quarry site while it was being excavated. Archaeological evidence was also found on the former Coln House School lands and the field west of Horcott road, including evidence of a round barrow. 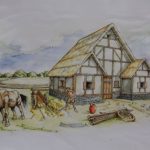 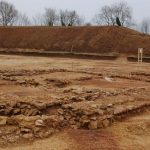 In October Edwin Cuss took us on a tour of the former shops in the town when Fairford was far more self sufficient that it is today. Edmonds the depart 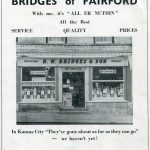 ment store was in the High Street, with H M Powell, draper and Baldwin’s hardware shop, which later became Peymans. The talk had been given before in 2009. At that time the road through Fairford was closed and members were able to enjoy a traffic-free tour to see the sites of the former shops. As always it was a pleasure to see the old Fairford pictures.

There was a change of topic away from Fairford in November when the excellent speaker Paul Barnett took us on a whistle stop tour of the Sharpness to Gloucester canal describing the former industrial buildings at the Sharpness end of the canal and how and why they were built. The canal itself was built because of the tidal nature of the River Severn with its changing sandbanks and dangerous currents. Along the canal we saw the remains of the Severn Railway Bridge which was demolished after two barges collided with the bridge in very bad weather in 1960, resulting in 5 fatalities. Then up to Purton where is the phenomenon of the ‘Purton Hulks’, boats that were driven on to the banks of the river to help prevent erosion. Then on to Gloucester showing former warehouses, boats and the rejuvenation of the Gloucester quays. It must be an impressive sight to see the tall ships at the annual Gloucester festival. 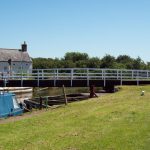 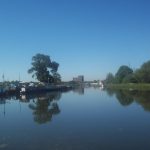 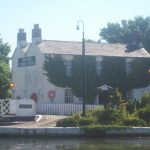 Fairford Carnival: the final years 1953-56 21 February 2019
Edwin Cuss gave an excellent PowerPoint presentation to about 50 FHS members and visitors at the February morning meeting. There was also some audience participation which involved the singing of ‘Daisy, Daisy’ and ‘Tom Pearse, Tom Pearse’. Both songs were portrayed by carnival floats.

After World War 2 the National Health Service came into being and funded Fairford Hospital, so there was no longer the urgent need for raising money. However, it was Coronation Year, 1953 which gave impetus to restart the Carnival and there was as much dedication, inventiveness and ingenuity as before. The Band Contest continued with bands coming from all over the country. The arena events continued with the many participants such as the USAF Drum and Bugle Band and the Household Cavalry Musical Ride for example. 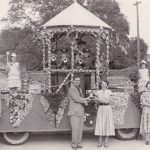 Members enjoyed the carnival floats and other pictures with some of them owning up to actually being in the photographs, albeit somewhat younger!

However in 1956 it rained and rained, the crowds did not come and there were some pictures of very bedraggled performers and floats. For the first time the Carnival made a loss, which was difficult to recoup, so as a result in 1958 the Carnival Committee sold off the equipment and the Carnival never restarted.